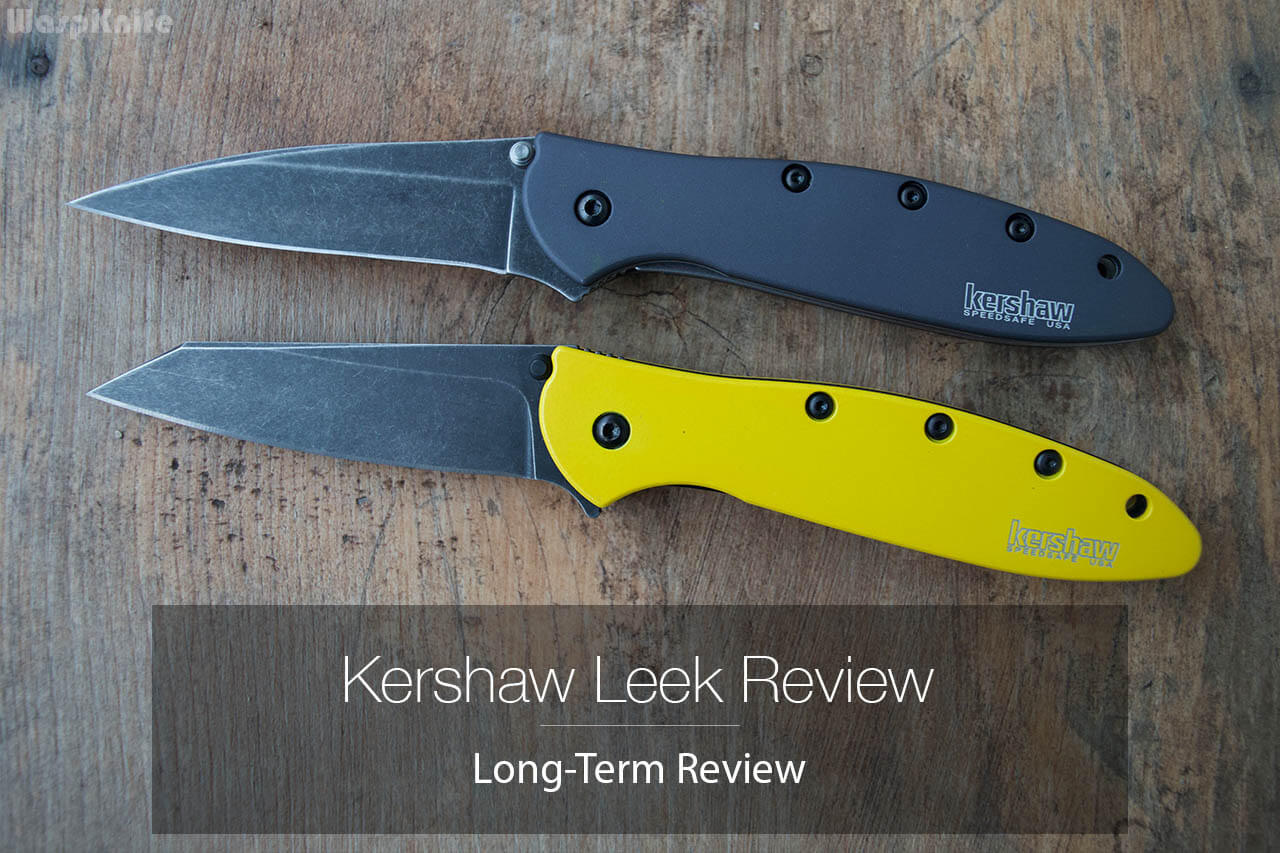 “Kershaw” has been a long-standing name in the knife industry for over four decades now. Here’s one of the most asked-for reviews: One of their flagship models, the Kershaw Leek Review.

After being awarded “Knife of the Year” in 2002, the Leek has grown in mass popularity with more than 40 variations available as of the publishing of this article.

You can find the Leek in a variety of handle scale colors including Gray, Black, Teal, Purple, Orange, Green, Red, Tan, and Blue! There have also been exclusive editions that include copper and carbon fiber handle scales with premium blade steels such as CPM 154 and CPM S30V.

With its slim design and lightweight features, the Leek is sure to be a staple in your everyday carry rotation. And did I mention it’s made in the USA? For the street price of $40+ you really can’t beat it.

If you’re considering a Kershaw Leek as your next pocket knife, let’s go over it’s specs to start with then we’ll dive into all of its features and attributes.

The Kershaw Leek was released in the early 2000’s and won Overall Knife of the Year in 2002. The USA-made Leek is still in production over 18 years later and stands as one of the most popular budget-friendly pocket knives to date.

Kershaw recently started producing “Sprint Runs” of some of their most popular knives and the Leek was the first to hit the market in mid 2020.

Featuring a bright yellow Cerakote finish on the handle scales and a Blackwash Reverse Tanto blade, the Leek was released in an upgraded CPM S30V blade steel which sold out incredibly fast.

Other options include carbon fiber handle scales and a CPM 154 steel blade and even a copper scale version also featuring the super steel CPM 154.

These special editions typically cost a bit more, but you are gaining a more premium blade steel and more expensive materials if you choose to go that route.

Most versions of the Leek come in Sandvik 14C28N blade steel, which is a popular choice for lightweight pocket knives in today’s age. 14C28N is used on several Kershaw models including the ever-so-popular Skyline, Blur, and Knockout.

14C28N is known for its toughness, ease of sharpening, and overall edge retention. There’s a reason it is a popular steel choice for lots of majority knife manufacturers: it works.

More expensive versions feature more premium blade steels that are even better than 14C28N. As mentioned previously, the Sprint Run that features a yellow Cerakote finish on the handle scales boasts an CPM S30V blade steel. CPM S30V is known for its extreme edge retention and corrosive resistance and makes the Leek an even better pocket knife for everyday carry.

Current editions including the Copper and Carbon Fiber versions boast CPM 154 blade steel which is another great option for users who are a little more rough on their pocket knife. CPM 154 steel is not quite as tough as S30V, but its ease of sharpening over 14C28N makes it a better choice for those who use their EDC knives regularly.

The Leek boasts a 3” “Modified Wharncliffe” blade which is great for just about any EDC tasks you find yourself needing a pocket knife for. Since the blade is only .09” thick it slices through paper and food prep needs with ease.

The downside to having such a thin blade profile though is you won’t be out in the woods using it for batoning firewood or other heavy outdoors tasks. There have been several incidents throughout the years of people breaking the tips of their Leeks due to misuse.

The Leek was not designed for heavy-duty cutting tasks; it is a great sleek design to be used in the aforementioned tasks. The Leek also stands out as a classy gentleman’s pocket knife if you need to suit up to go to work. Its slim design and weight make it a great choice for that dapper EDC loadout.

The Kershaw Leek is very sleek in both your pocket and in hand. With a 4” handle and the available lanyard hole it will fit into just about any hand you place it in.

Most Leek models feature a stainless steel liner lock covered in powder coated stainless steel handle scales. The Leek can have a slightly “slippery” feel if your hands are wet but a small piece of skateboard deck tape can remedy that quickly.

I have personally never had any issues with feeling like the Leek will slip out of my hands but adding some traction to the scales would be a great addition to the Leek lineup in the future.

The Leek’s ergonomics are also some of the best in the business. Although slim at only .31” thick, the Leek fits the hand well. If adding skateboard tape to a knife isn’t your thing, adding a small paracord lanyard to the handle of the knife can aid in getting a better grip on the knife.

The Leek also features a two position pocket clip designed for right handed users. I prefer to carry “tip up” so I switched the pocket clip to the opposite side for that method.

You can still use the knife if you are left handed, but I would suggest removing the pocket clip altogether if you are and add a lanyard for easier pocket retrieval.

There are also several companies that offer aftermarket clips for the Leek such as MXG Gear and LynchNW.

These clips allow for the knife to sit deeper in the pocket which may be better if you are moving around a lot and need the knife to be even more secure in your pocket. As it stands out of the box, the Leek will sit about .5” above the pocket line of most pants.

The Leek also has a huge aftermarket parts list if you want to customize it and make it your own. MXG Gear makes titanium standoffs and screws for the Leek.

These standoffs and screws come in a variety of color options to make your Leek stand apart from the rest of the bunch. Modifying the Leek is also very easy with the use of Torx T6 bits. (We recommend Wiha brand bits as they tend to hold up better than other brands)

The Leek does feature “jimping” on the spine of the blade where your thumb rests, but it is neither raised nor aggressive enough to make that much of a difference. The jimping does shine in another area which we’ll discuss further later on in the article. I wish there was some jimping where your index finger rests to add some more traction, but for now none of the current Leek models offer it.

There is also a small bit of jimping on the flipper tab that does add some traction in comparison to the jimping found on the blade’s spine.

The Leek’s flipper tab is on the smaller side so the addition of the jimping here was a genius idea on Ken Onion’s part when designing this knife.

The assisted opening feature is a gimmick to some, but I like the ease of one-handed opening thanks to the SpeedSafe technology. If you’d prefer to have a manual folder and have some Torx T6 bits laying around you can hop on YouTube and find several videos demonstrating how to disassemble the Leek and remove the Torsion bar.

Although I have not removed the SpeedSafe technology on my Leek I have done so on other Kershaw’s I own. Removing the torsion bar is simple and straightforward and the knives are typically just as smooth after their removal.

The lockup on the Leek is solid with no blade play in any direction. Again, you’re not going to want to take the Leek out to the bush and baton with it, but the lockup is solid enough for any daily cutting tasks you may come across.

If you are worried about the Leek accidentally firing inside your pocket or just like having some extra safety precautions, the Leek would make a great choice as it includes a manually sliding safety in the handle.

Kershaw designed the “Tip-Lock” and included it on the Leek. When the knife is closed, you can position the safety to cover the tip of the blade so the SpeedSafe torsion bar does not allow the blade to be opened accidentally.

There are not many assisted pocket knives on the market with this feature so it was nice that Kershaw included it. I’ve never been a fan of safeties in general, so I removed the safety with the help of a Torx T6 bit and it made the Leek lighter by 0.0001%! Ha!

The Tip-Lock is available on other Kershaw models such as the Ken Onion Designed Scallion and Chive as well.

No matter what variant you go with, the Leek’s fit and finish will hold up to years of daily use. I have had several variants of the Leek over the years and currently own two including the coveted Sprint Run Yellow and their finishes have held up incredibly well.

I usually carry my wallet, a lighter, and some lip balm in the same pocket as my primary EDC knife and have had no issues with the handle scales getting scratched in the time I’ve owned my Leeks.

Comparison to Other Pocket Knives:

The Leek is definitely a staple in a lot of people’s carry rotations, but it is not without some competition. As mentioned previously, the Kershaw Skyline is almost neck-in-neck with the Leek on popularity, size and weight, and style.

The Skyline will be reviewed in another article but is another great option for a lightweight and streamline EDC pocket knife. If the SpeedSafe assisted technology or steel handle scales aren’t your thing, you may want to check out the Skyline instead.

The Skyline features the same rough concept of the Leek with a slightly different blade style and is a manual folder. The lightning-fast flipper tab and dual thumb studs are comparable between the two knives.

Two other options outside of the Kershaw lineup would be the Civivi Elementum and the Ontario Knife Company Rat Model II. Although neither share the Leek’s thin Modified Wharncliffe blade style, both are great budget options that you can pick up and have a similar price to the Leek.

Both the aforementioned knives come in G10 handle scales so they weigh a little more than the Leek. The Elementum only has a flipper tab but offers smooth action and sleek lines.

The Rat II does not have a flipper tab but its raised dual thumb studs also offer fast deployment and is available for left handed users with its four-way position pocket clip.

The Kershaw Leek has been a bestseller for Kershaw Knives for over 15 years now and is still a knife just about anyone can name right off the top of their hand when they think “pocket knife.” With so many variations in handle colors, blade steels, and aftermarket accessory options, the Leek would be a great addition to your EDC rotation! If you’re looking for a sleek, lightweight, and durable knife with a lifetime warranty pick up a Leek today!

Affiliate Earnings Disclosure Waspknife.com is a participant in the Amazon Services LLC Associates Program, an affiliate advertising program designed to provide a means for sites to earn advertising fee by advertising and linking to Amazon.com.

3 thoughts on “Kershaw Leek Review: (Worth it?)” 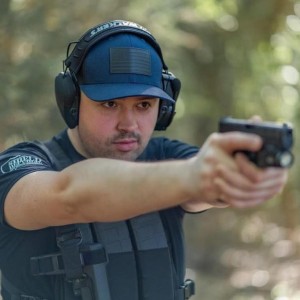 Hi, I'm Drew, and I’m an author at WaspKnife.com. I buy knives to help you buy the right one under your budget.

WaspKnife is a Knife Journal by Jon. At WaspKnife, I aim to deliver the latest and greatest of the knife world to my audience, along with my experience, reviews and tips

Scroll back to top